Challenges of the Electricity Transition

Most people discuss electricity storage as though the challenge were just energy: balancing renewables, providing enough energy when they’re not generating as much as is needed at any given time. In terms of operational cost, that’s just a significant minority part of the challenge. In fact, the overall challenge has many elements, including:

This looks at the overall non-energy costs of running the system; the contributing factors will be the subjects of other analyses. And while it focuses on the British grid, the lessons are valid for most grids world-wide: those that are less decarbonised have the opportunity to prevent these issues with the right kind of electricity storage. 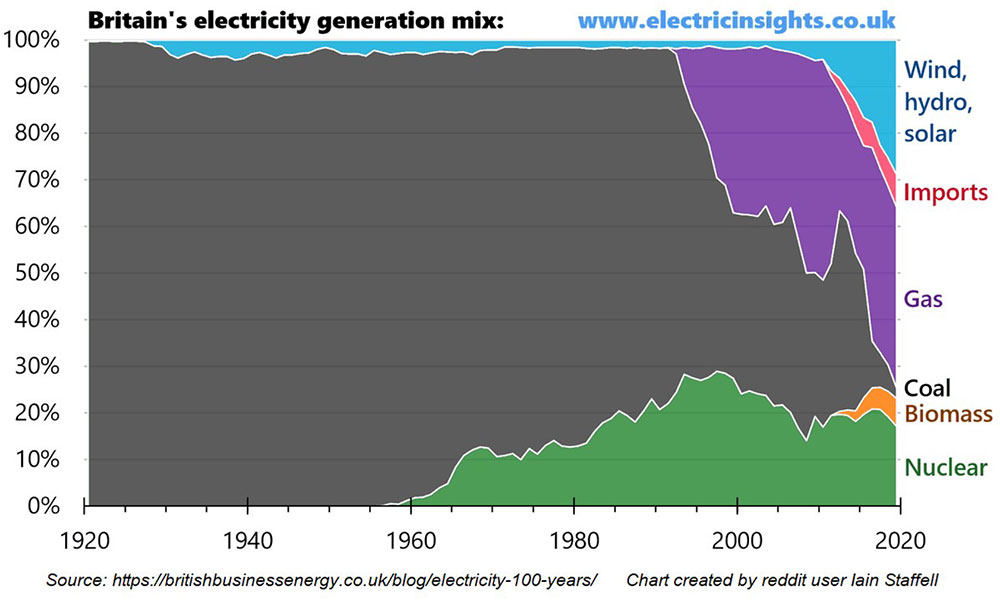 Therefore the challenges are about transforming:

All other ways of looking at the issues merely complicate matters and make the transition harder and costlier to manage, while reducing both reliability and resilience. The lesson is simple: unless the simple challenge is dealt with simply, by strategic actions (as opposed to short- and medium- term fixes) and by treating the system as a whole (rather than as a myriad of discrete salami-sliced sub-problems), it will be unaffordable, unreliable and fragile; this will lose both public and political support for the energy transition. But if it’s dealt with simply, strategically and with a whole-system approach, then it will be affordable, reliable and resilient.

Without sufficient suitable storage, the British experience (see graph) is that the non-energy costs of operating the grid (to which BSUoS [Balancing Services Use of System] charges approximate) start to rocket, and thereafter rise exponentially: 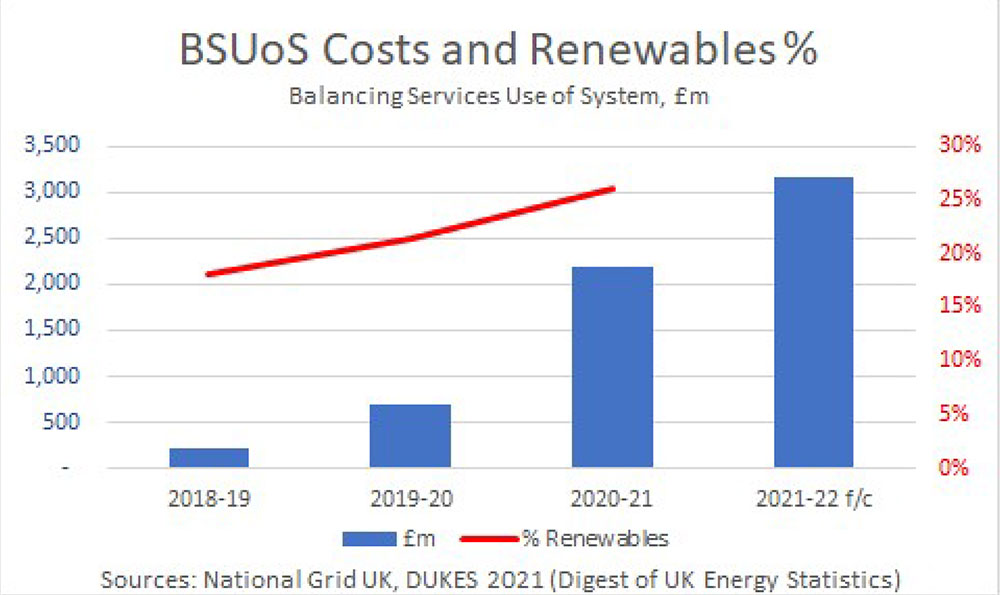 The 2021-22 forecast costs are expected to be exceeded substantially, as have all National Grid’s previous estimates such as inertia costs and minimum grid currents – see below for further information.

But even if we accept National Grid’s forecast, this graph shows a 14x increase in 2021-22 than just three years before. We expect most grids to suffer such cost increases when their renewables penetration exceeds about 16%. Until that point, there is sufficient generation in power stations to accommodate the “disturbances” from renewables of intermittency and asynchronicity without great effort; above that point, the scale of the disturbances is growing while the power stations available to deal with it are reducing in number.

Typical actions (albeit in a heavy-intervention week) by the National Grid’s Control Room are shown by their own data: 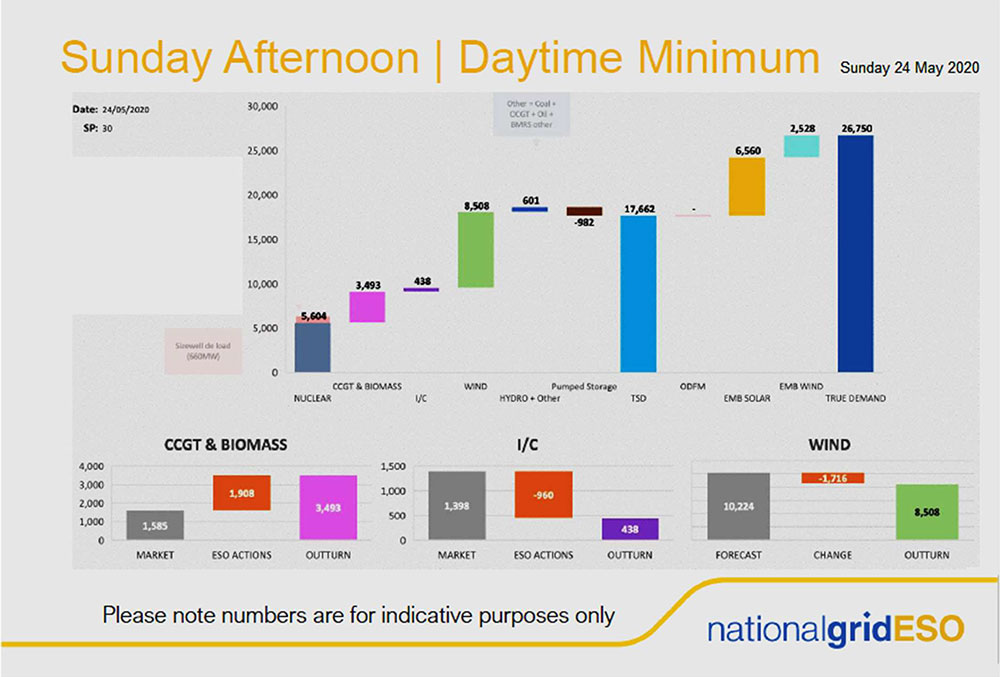 On this day (Sunday 24th May 2020), nuclear (which should never be turned down if at all avoidable) was turned down by a few hundred megawatts (MW). Gas-fired power stations were turned up by almost 2GW, interconnectors down by almost 1GW and wind down by over 1.7GW. This was because of a number of reasons, including:

A constraint is a bottleneck in the system. Imagine a town with employment at one side of a roundabout, and a residential area the other: the roundabout is a constraint. Other constraints may be formed by traffic lights, roads converging at both sides of a constriction (such as a bridge) or just a narrowing of the roadway; roadworks also usually create constraints. Similarly, on the grid, substations, stretches of cabling, and other equipment may form constraints, as does work on the network. the week of 10-16 July 2022, was: 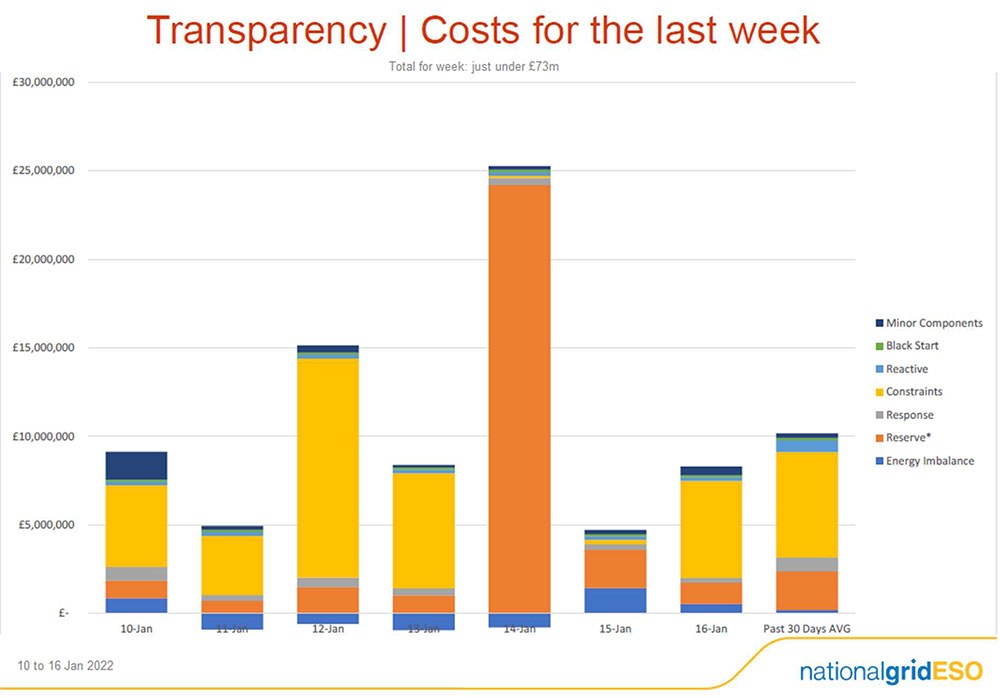 The two biggest elements are constraints (which may be caused by either energy or stability services in the wrong places) and the need to maintain reserve availability.

Ignoring (for the time being) the fact that nearly all interconnectors are DC links and therefore have no natural inertia, and considering energy flows alone: since Russia invaded Ukraine, countries have sometimes had insufficient output to support neighbouring countries’ shortfalls, and interconnectors failed to provide the required energy during times of system stress (high demand and/or low output). A typical time of system stress is a windless winter evening and overnight: such times are largely concurrent throughout Europe. I have been proclaiming this inevitability in general terms since 2016, and quantified by a study of European national energy transition plans since 2018 (this is a more recently updated version).

If sufficient such storage is not implemented, then the only way to avoid this linear rise in curtailment costs is to have even greater increases in other costs as ever greater measures must be enacted to keep grids supplied and stable. 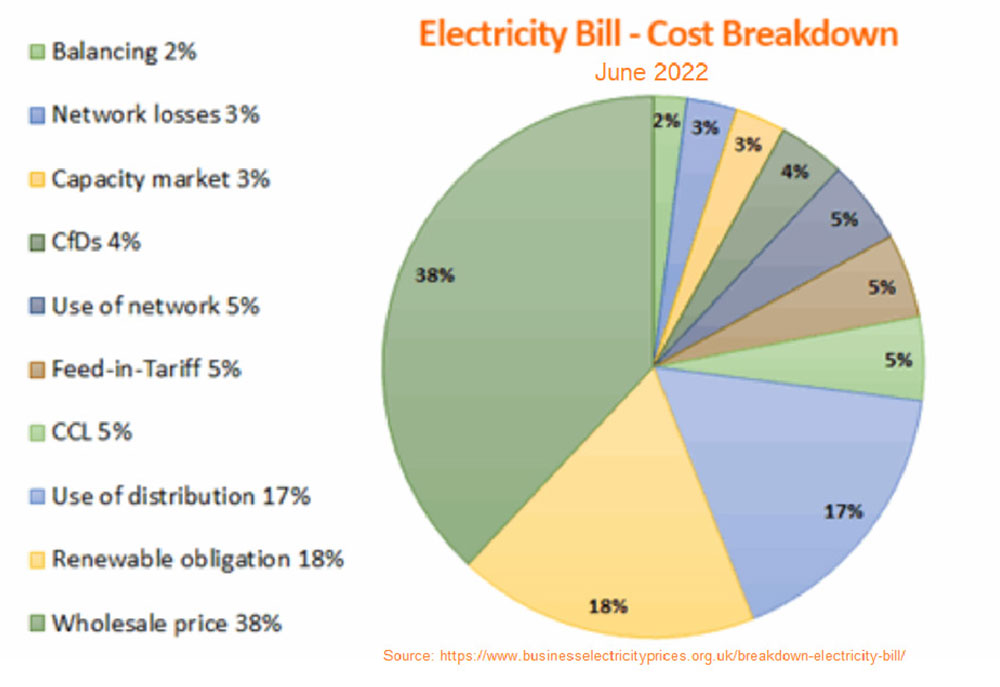 The Effects on Electricity Bills

Electricity bills are made up of many elements: the wholesale cost of electricity, and a variety of levies and charges, which are (together) the system running costs. As a result of all of this, the share of our electricity bills that is due to the cost of energy (as opposed to all the various system running costs) has dropped from 75-80% to 38% wholesale energy cost. And that wholesale energy cost is itself made up of the true cost of energy plus the various charges that generators pay.

And these system running costs are still rising – exponentially.

Ancillary services are those based on speed of response, for recovering from faults. A recent fallacy is that this speed needs to be as fast as possible – yet the multi-millisecond response time of batteries is sufficient delay to allow an initial fault to cascade into subsequent faults. The former power station supplied grid had neither such fast response times nor such vulnerability to collapse: the natural inertia made ultra-fast response times unnecessary by preventing the problems rather than trying to cure them after the event.

These problems will only get worse as the energy transition progresses, unless they are addressed by sufficient large-scale, long-duration, naturally inertial electricity storage to power each grid.

Widespread roll-out of the right kind of electricity storage, in the right places, is by far the cheapest and most manageable way to solve all these challenges; the wrong kind cannot. To solve them, the storage needs to be of sufficiently large scale and long duration, and also have natural inertia, that is, they must be synchronous – i.e. machines that rotate with a frequency matched to (= is a multiple of) that of the grid. Such plant provides:

When suitably located, such storage can also vastly reduce the infrastructure costs of the energy transition too, but that’s the subject of a future analysis.