The challenge of grid stability currently costs the grid about a half of energy balancing, but growing faster; within a very few years it is expected to overtake the balancing costs. In 2020 (and coincident with the rocketing non-energy costs of operating the system), the periods of maximum control room intervention changed from periods of peak demand to periods of daytime minimum demand. This applies almost every single week: much more money is spent managing situations of low demand and high renewable generation than the reverse.

If you’re driving a car at speed and its engine fails, it doesn’t feel as though it’s hitting a brick wall: instead, it loses power and slows gradually enough to keep safe and uninjured, often giving you time to correct the problem – or at least mitigate it such as by pulling over onto the hard shoulder. That is because of its momentum.
Inertia is the momentum of a large rotating machine. This inertia does the same job for the grid, slowing the rate of change of frequency (RoCoF) when a fault occurs in the system, i.e. avoiding spikes on the mains and step-changes in frequency and/or voltage.

Also called Synchronous and Asynchronous systems because naturally inertial systems have large rotating machines that spin with a frequency matched to (= is a multiple of) that of the grid.

Battery providers claim that they provide inertia. However they can provide synthetic inertia, not the real thing. In order to provide it, dedicated batteries are needed: the same ones cannot be used that provide energy balancing services, unless by reserving capacity and providing less of each service.

And synthetic inertia is not like the real thing. Synthetic inertia is a very fast response time, typically 8-20 milliseconds. Despite its speed, this is a delay, which allows the spike on the mains (which is frequently generated by a fault on the system) to pass through. It is this passing-through that turns an initial fault into a cascade of subsequent faults. An example of this occurred on 19th August 2019 in the UK, when two initial faults (one in a power station, one on a wind farm’s power supply), both caused by lightning strikes within 8 minutes of each other, half-way up the east coast of England. In former times, this would have been accommodated comfortably by the natural inertia of the power stations; but on this occasion the grid was relying on synthetic inertia from batteries. Therefore the spikes passed through to cause a cascade of failures around the system that blacked out a million people, from the rail system in London (in the south east – during rush hour) to a hospital in Cumbria in the far north west of the country.

For Lack of Inertia

In order to avoid such cascaded failures in future, National Grid instigated a programme of relaxing breaker settings through the entire country. As breakers are there to protect customers’ equipment, this relaxation of their settings is jeopardising customer equipment to protect the grid – a multi-million-pound dereliction of duty.

Other actions taken by the grid involve paying to turn down/off asynchronous systems (renewables and interconnectors) and paying again to turn on power stations, leading to enormous waste and fast-increasing costs. 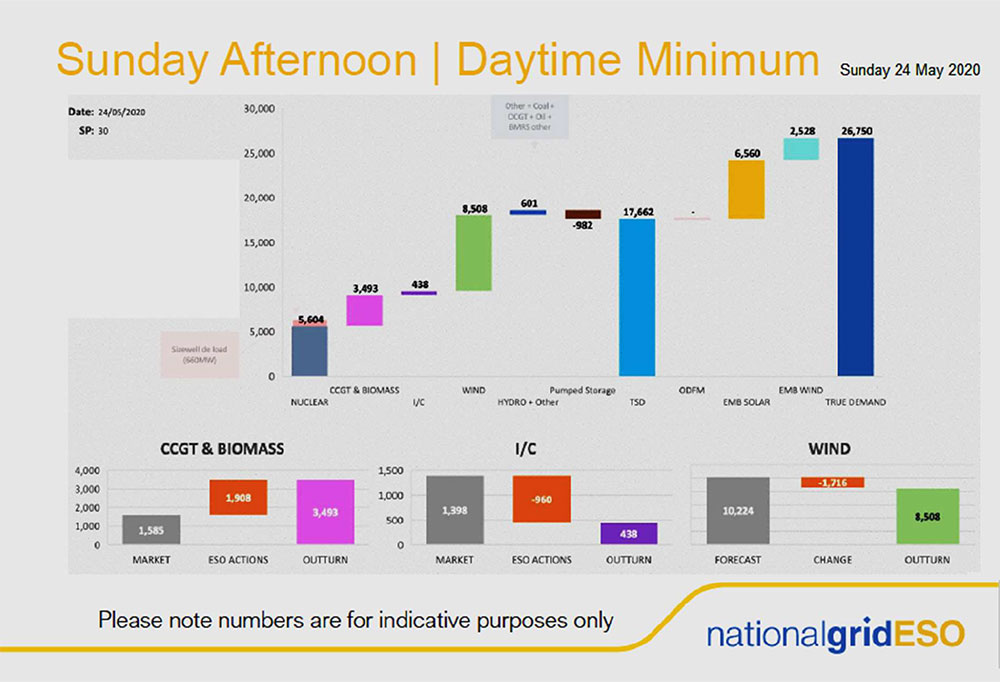 Since about two years ago, the greatest number and value of interventions by the Control Centre changed from peak demand periods to troughs. Above is the account of the actions taken on Sunday afternoon 24th May 2020 – admittedly during the first Lockdown, but that only replicated the renewables penetration forecast for just a few years later, so very representative of standard conditions expected in the mid 2020s.

On that day, nuclear was turned down due to grid congestion (i.e. generation was in the wrong place) – which should never occur: it’s pure energy wastage (like turning down wind farms) but worse – it actually reduces the life of the plant by using up its damping rods. Interconnectors were turned down by almost 1GW and wind by over 1.7GW in order to reduce asynchronous generation; power stations were turned up by almost 2GW to provide synchronous generation. The 0.7GW difference was due to excess wind generation above forecast, which would have been accommodated by turning off the power stations if inertia hadn’t been a major consideration.

This is analysed by National Grid in the diagramme below, in which the vast majority of the week’s interventions (for the week 10-16 Jan 2022) were to have sufficient reserve and to overcome constraints. Inertia is not mentioned because it falls into most of the categories: if it’s in the wrong location, it’s a constraint cost; if there is insufficient for the biggest planned “event” (biggest producer failing), then it’s a reserve cost. The third biggest element is reactive power/load, which is also a benefit of synchronous generation and storage.

The overall effect of this is that the non-energy costs of balancing the grid are rising exponentially, as shown in the graph of BSUoS (Balancing system Use of System) costs which approximate to costs of non-energy interventions.

As this graph shows clearly, up to ~16% renewable penetration, it is easy to manage the grid: turning down power stations to accommodate renewables leaves enough of the former to keep the grid stable. But above ~16%, there are increasing amounts of renewables for which compensation is needed, and decreasing amounts of power stations to provide that compensation, the result of which is exponentially increasing costs. Logically there will be a systemic limit to this strategy above which compensation is impossible at any cost.

It is worth noting that the 2021-22 figure in the above graph is a forecast. I stated that it is likely to be a great under-estimate, and that the blue bar should exceed the £3.5bn line. The actual figures have not been declared by National Grid, but they did apply for (and were granted) a special regulatory derogation to defer some BSUoS charges to the following year because that year’s charges would have been excessive.

So National Grid, ever keen for quick fixes rather than true solutions, are investing (by my estimate) over £100m in 2022-23 (and increasing amounts likely in future years) on building and operating synchronous condensers and flywheels which cannot provide other benefits such as energy balancing, on spinning defunct power stations as less-efficient flywheels rather than letting them be demolished to save financial and resource waste, and on grid-forming inverters that provide synthetic rather than true inertia. A fantastic waste of money, time and effort!

The true solution would be to build sufficient inertial storage to provide the inertia required by the grid, which would also provide concurrently all the other services such as energy balancing, voltage and frequency regulation, reactive power and load, and power quality. And, unlike most, Storelectric’s can provide all these 24/7.

The power system operates at a set frequency, usually 50Hz or 60Hz. This denotes the frequency of a sine wave. If that sine wave is clean, then the power is transferred efficiently and effectively from the grid to the user’s equipment, which can operate without problems.

However there are many ways in which sine waves can become corrupted, such as:

To understand this most easily, it’s best to consider sound which is also carried on a sine wave. A totally pure note is a clean sine wave. Noise, harmonics, spikes (e.g. a bang), step changes (volume rising or falling), ringing and wandering all occur to contaminate sound waves.

Power electronics, such as grid-forming inverters, can clean up these waves, and also set (as opposed to follow) the frequency and voltage level. But they need dedicated capability, only apply digital cleaning (which results in the wave being a myriad of tiny steps rather than a smooth form), are very expensive, only last 8-10 years and have a performance that deteriorates substantially over that life. Suitably designed synchronous machines have none of these limitations, and produce the clean output as a natural product of their other operations.

The challenge here is that regulations don’t allow the grid to invest in storage. But they can incentivise such synchronous storage, which currently they choose not to do – by salami slicing services, short-duration contracts and other means. Therefore although Storelectric’s plants can indeed be profitable from day 1 in today’s grid, they must be built and traded merchant. The regulator and grid operators should do more to incentivise large-scale, long-duration, naturally inertial storage.

In this analysis we use the experience of the National Grid in Great Britain as an example of what will transpire world-wide as different grids get to similar levels of renewables penetration.

Therefore the most cost-effective, simple, controllable and long-lived solutions are to have lots of naturally inertial plants on the grid. Given that power stations are being replaced rapidly by asynchronous renewable generation, and that storage is needed on the same scale to provide the energy balancing, that means that the storage should mostly be synchronous – and at a scale well suited to replacing the scale of the power stations too. Any other solution merely adds to the grid’s cost, complexity and fragility.