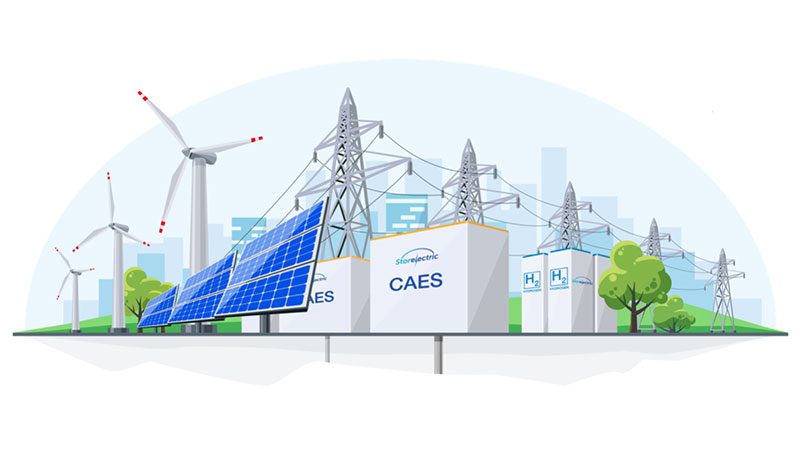 Hydrogen is increasingly being touted as the ideal technology for both electricity storage and balancing renewable generation on the grid. The reality is more nuanced than that: hydrogen and CAES complement each other, each with distinct roles in which they are the best solution. The energy transition will be least disruptive and most affordable, reliable and resilient when each technology (and not just these two) is used where it operates best, and not treated as a “one size fits all” or “magic bullet” solution.

Hydrogen is an excellent replacement for methane in gas grids. In much of the developed world, gas grids have been modified over recent years to be hydrogen compatible with, for example, polyurethane pipes and better seals to contain the smaller molecule and avoid embrittlement.

It’s not a simple substitution: over ⅓ more gas volume is needed for the same energy output; and equipment needs modification because its flame characteristics are different. Most important of these characteristics is that it burns hotter; other differences are the shape of the flame and the location of its hottest part. For this reason, the roll-out of hydrogen grids should not be by steady increases in the proportion of hydrogen in the gas mix: that would entail multiple conversions of equipment which would be very costly and disruptive. Better to convert localised areas to 100% hydrogen in one single conversion, then to expand into other (usually neighbouring) areas as hydrogen becomes available cost-effectively.

Some chemical process are also suitable for hydrogen, pumped in through the gas grid. One example is steelmaking, where oxygen is the usual reducing agent, which uses huge amounts of electricity from the grid – which is not yet decarbonised. There are large-scale experimental developments in substituting hydrogen for the oxygen, and thereby reducing the carbon footprint of steel.

A great deal of other research is taking place into other parts of the steel making process, and other chemical processes such as cement making. It is quite possible that hydrogen may form part of the solution in those too.

Another ideal use for hydrogen is in fuel cell vehicles which not only acquire longer range than electric ones but also faster refuelling times – comparable with petrol and diesel vehicles. In fact, the filling station network is ideal to be converted to hydrogen too. And ensuring that the largest and most heavily used ⅔ of vehicles are powered by fuel cells would avoid the resource insufficiency and environmental unfriendliness of lithium, rare-earth metals and other materials. 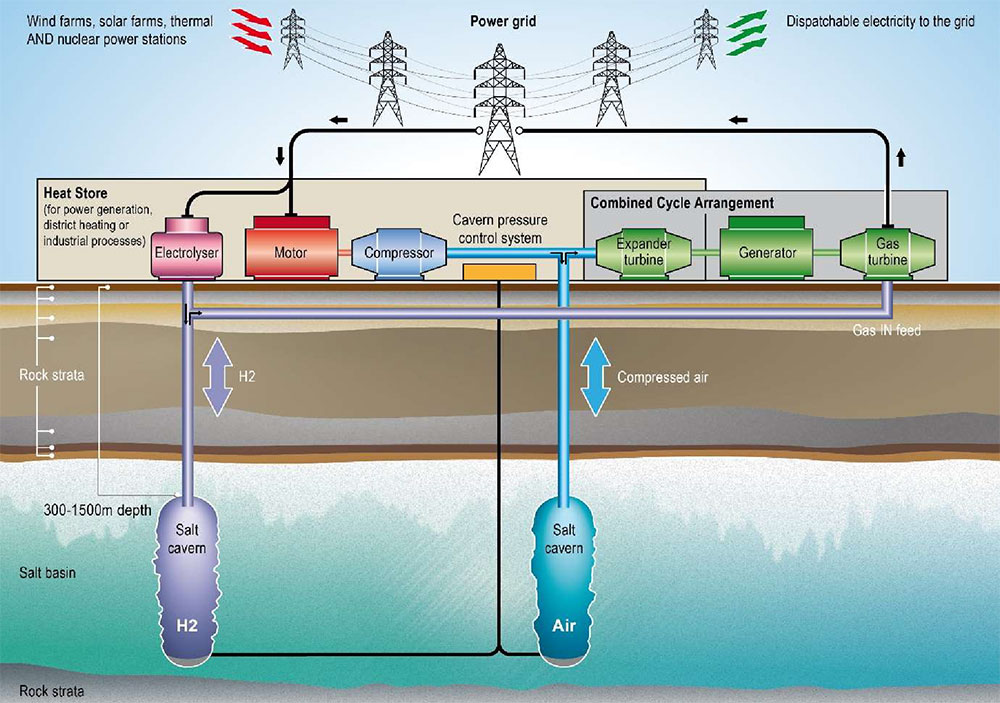 Many propose hydrogen for grid-connected electricity storage, for which it is NOT suitable other for inter-seasonal storage – and it’s doubtful that inter-seasonal storage will ever be required because the seasonality of different renewable generation technologies differ, so the right mix of each (and maybe a small surplus) would eliminate the need for such storage. For shorter durations (for hours, days and weeks of output) CAES is much more efficient: the electricity – electrolysis – storage – power generation round trip cycle efficiency is currently barely 20% and can never (even theoretically) climb above the low 40s %, whereas Storelectric’s CCGT CAES is 57% stand-alone (>80% with heat networks) and TES CAES is 67-70%. And the equipment for such a round trip is much more expensive for hydrogen than for CAES.

Hydrogen is often proposed for balancing intermittency of renewable generation, but is very ill suited to it. Firstly, flexing the electrolysis process only addresses that intermittency: it ignores the variability of electricity demand, so only does half the job that CAES can do. Secondly, such flexing needs between 2.5 and 8 times the amount of expensive electrolysis equipment than if supplied by baseload electricity, which the appropriate configurations of CAES can provide.

One of Storelectric’s technologies, CCGT CAES, is diabatic, burning gas to add the heat of expansion. The equipment to do so is hydrogen compatible, so will burn hydrogen increasingly as it becomes available cost-effectively.

Storelectric also plans a hybrid version of its adiabatic TES CAES in which hydrogen would enable a doubling of duration during times of need, e.g. Black Start.

Most electrolysis uses the Proton Exchange Membrane (PEM) technology, which is power-hungry, small-scale and (because the membrane is an expensive consumable) costly. The next most common method is an alkali process which uses strong (and hazardous in many ways) and expensive alkali. Without other large-scale electrolysis technologies, hydrogen production will remain mostly by steam methane reformation (SMR) which needs Carbon Capture and Storage (expensive, hazardous and imposes large inefficiencies on the SMR plant) to become a low-emissions technology – CCS is never perfect, so it will never produce zero emissions. There are other large-scale electrolysis technologies, but they have not attracted funding: they need to.

Storelectric has a granted patent to use the heat of compression of CAES to catalyse the electrolysis process. Substantial funding and a few years’ further development work is needed to commercialise it.

CAES and hydrogen therefore have different but complementary roles to play in the energy transition. Hydrogen is ideal for the gas grid, some chemical processes and energy uses that are not grid-connected electricity, e.g. motion in fuel cell powered vehicles. Where the use is grid-connected electricity, hydrogen will never compete with the simpler, cheaper and more efficient CAES energy storage process.

So hydrogen and CAES together enhance each other’s role in the energy transition, to make it less disruptive and more affordable, reliable and resilient.