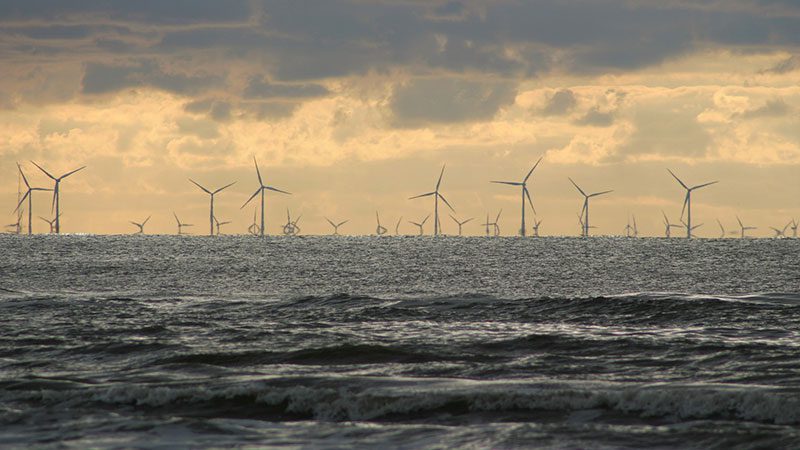 The UK government and grid are planning £16bn grid upgrades as part of wider developments to accommodate an additional 17GW of new offshore wind (to 35GW intermittent renewable generation) by the mid 2030s. This is to accommodate the peaks of intermittent generation in order to reduce curtailment, and will require many unsightly new transmission lines – primarily up the Eastern side of the country. But it neglects three further challenges, which will cost billions more, in both investment and annual grid operating contracts:

Although this analysis focuses on the UK, that is only because the UK is further advanced than most in the decarbonisation of its grid (and most familiar to the author); the same issues will apply to most grids (e.g. the American ones) as they decarbonise.

The cost of getting it wrong is immense: billions in capital costs, and over a billion in annual operational costs – as shown by the first UK Lockdown.

The balancing services are needed to keep the lights on during “times of system stress”, i.e. high demand and/or low renewable generation. Currently the country relies on imports through interconnectors which, as has been analysed before, will not necessarily be available – and Brexit makes it politically unacceptable for neighbouring grids to fulfil their contracts with the UK if doing so would create or exacerbate energy shortages at home. Other sources of balancing services are power stations, which create emissions (and Carbon Capture and Storage is very expensive and imposes significant efficiency penalties and safety hazards) and storage. However, despite recognising a need for 20-40GW of storage, mostly of large scale and long duration, all regulatory and grid activity focuses on short-term investments into short-duration, small-scale batteries.

The stability services are required because power stations are closing. National Grid is at the forefront of dealing with one of their previously unappreciated benefits, namely the inertia that their large rotating generators provided which reduces the rate of change of frequency (RoCoF) when a fault occurs. It is that RoCoF that trips breakers. One of their strategies is to adjust all breakers to relaxed RoCoF criteria, which they proclaim a success, but which actually passes the problem down to customers’ equipment. Another stratagem is to contract with “synthetic inertia” from DC connected sources such as batteries, interconnectors, and wind and solar farms. However synthetic inertia is an ultra-fast response time; any response time at all is a spike on the mains and thus a RoCoF event, and it was this reliance on synthetic rather than real inertia that caused the widespread black-outs of 9th August 2019. While synthetic inertia is good for recovering from faults, it cannot prevent them occurring in the first place.

Wherever the balancing and ancillary services are provided, if it is not at the point at which their need is created, there needs to be a suitable grid connection to them. This will require large-scale grid reinforcements throughout the system. To avoid this, the optimal place to provide such services is at the renewable generation, or at their point of connection to the grid, or somewhere between these two; failing that, grid upgrades can be minimised by minimising the distance between the service provision and the point of connection of the renewable farm to the grid.

Even if the grid were to be upgraded to the point of remote provision of such services, this still leaves a number of problems.

£16bn for 17 GW offshore wind is ~£1bn/GW. This is just the cost of carrying the energy. NOA did not evaluate the cost of connecting up the balancing and stability services providers, which we guesstimate to be an additional 25%. Moreover, this £1.25bn per GW grid upgrades incurs 10% additional on-costs every year thereafter (£125m p.a.), split roughly equally between maintenance and operational costs. And this ignores the contractual, emergency costs of procuring those balancing and stability services, or the ever-increasing complexity for the control centres to manage.

Note that the further the energy transition progresses, the higher the renewables penetration on the grid, and therefore the higher every one of these costs will rise.

A Better and Cheaper Way

Connecting large renewable generation to the grid through large-scale long-duration storage would greatly reduce costs and improve the services. It benefits the grid by: 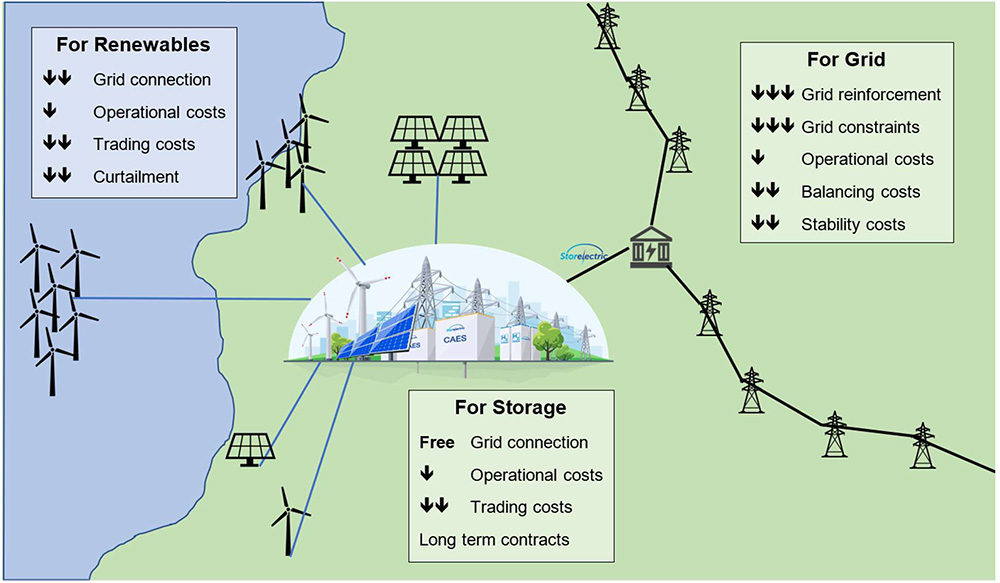 Meanwhile, such a configuration could substantially increase the profitability of both generation and storage, and enable renewable farms to be built where grid congestion would otherwise prevent them. It would therefore be built and operate commercially.

In considering different storage technologies, it is important to determine the number of services that the storage can deliver concurrently, using the same resources (i.e. not sub-dividing the plant’s output or storage capacity), e.g. one of Storelectric’s plants can deliver concurrently a range of services that require many same-sized batteries:

What Needs to be Done

There are a number of things that government, regulator and grid need to do in order to enable all this – most of which cost nothing, and the remainder cost very little in comparison with the billions being planned. These include:

The result will save billions (or tens of billions) in grid upgrade costs, and further billions

in both operation / maintenance costs and procuring services, whether for balancing /

constraints, for inertia and stability (as shown by the blackout on 8th August 2019), for

energy sufficiency in the UK, or for black start and other services. And all this is additional

to the benefits in making renewable generation itself cheaper and more profitable.